Gettin' Some Booty(s) From Old Mexico

Since we're workamping in Tucson, AZ for the winter, we couldn't resist the temptation to go to Mexico and see what the hoopla is all about. We heard about cheap dentists, pharmacies, leather goods, knickknacks and more. And yes, we also heard about the drug smuggling and human trafficking that goes on around these border towns. Some research told us to stay on the main tourist streets during daylight hours. So we got together with another couple and headed south to the border. 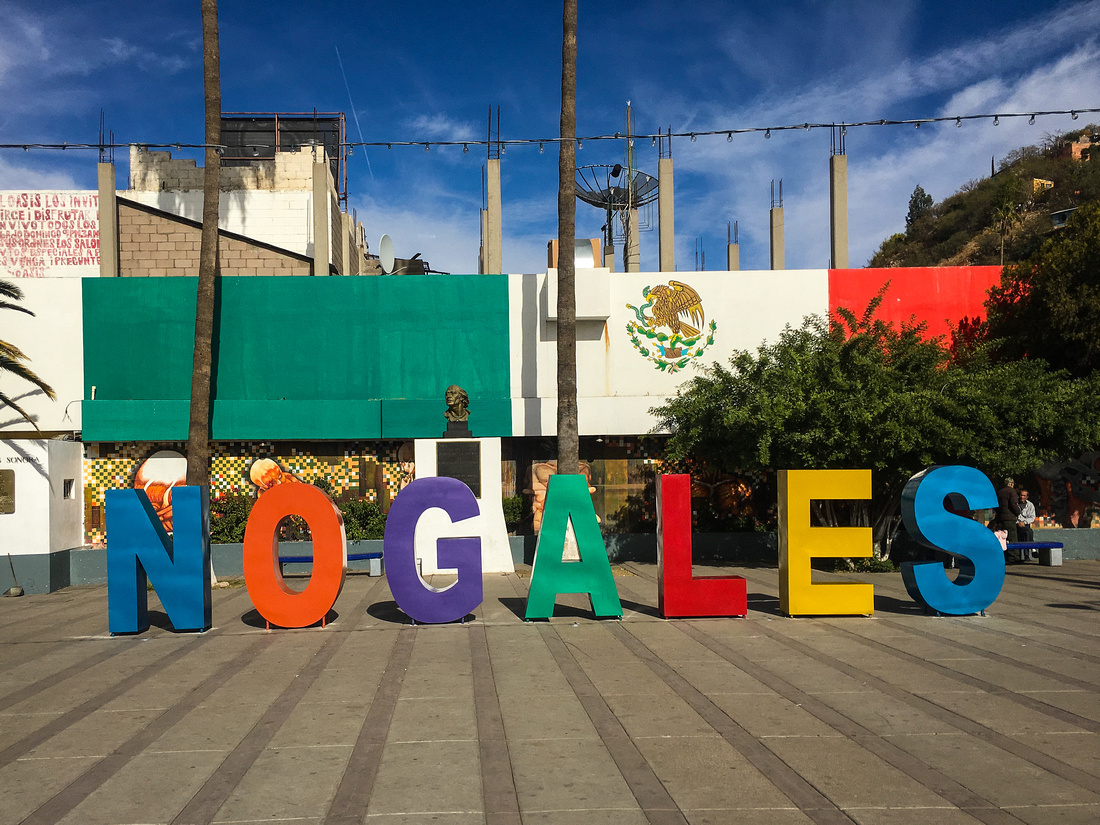 Nogales Letters Sign, Nogales, MexicoNogales spelled out in large letters in the park.

Our point of entry was Nogales. The town was split by the border so there is a Nogales in the U.S. and Mexico. We parked in the U.S. at Ed's for $5.00 a day and walked across the border. Ed's had a lot of good reviews and it was the first lot we came to. Crossing the border was easy, no questions asked and no one to ask them. 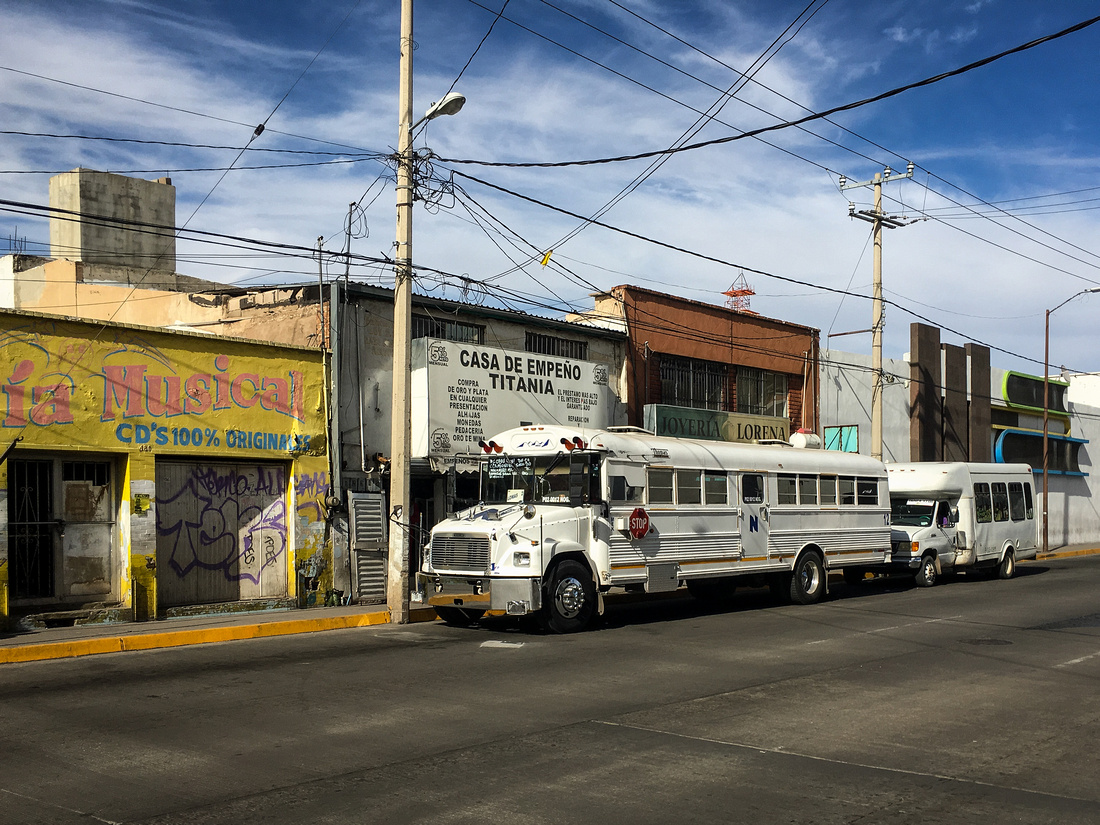 You could easily see why they call it "Old Mexico". The bus in the above photo is the public transportation bus. Buildings are old, stores are closed and there are holes in the sidewalk. A lot of merchants stand outside and try to sell you right from the sidewalk, even yelling from across the street. 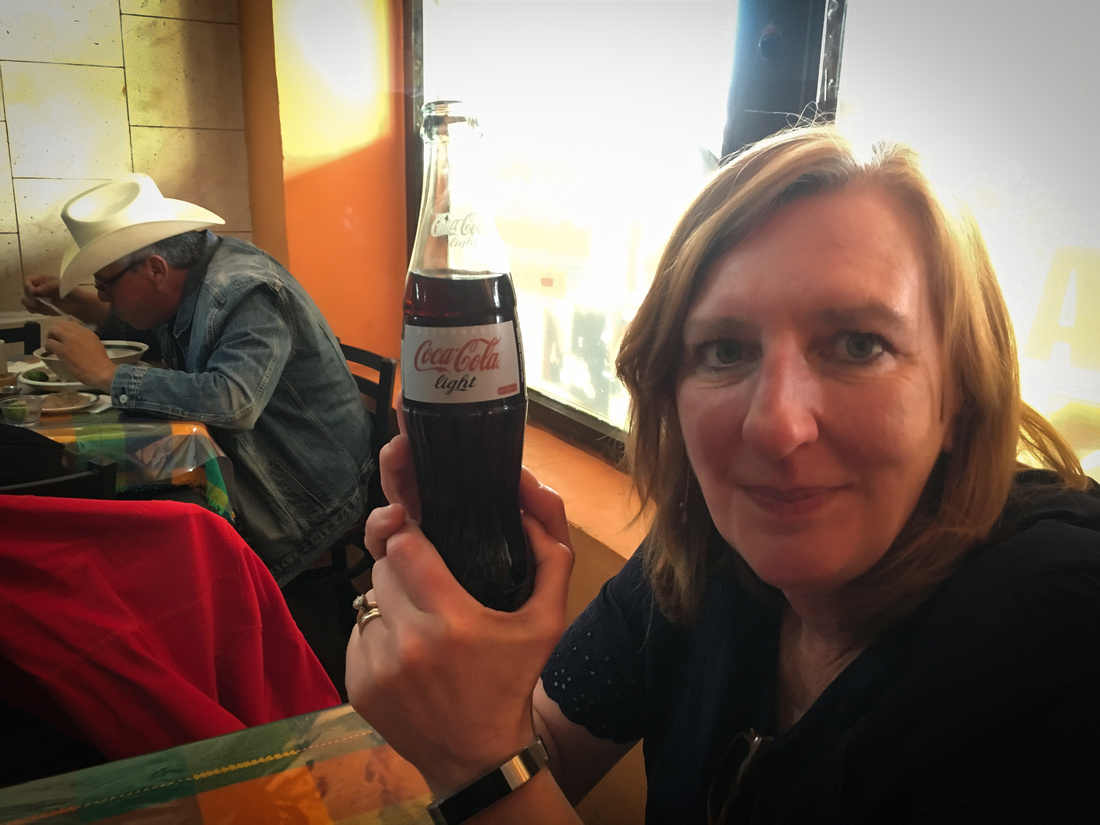 Another warning was to not drink the water which includes ice in your margaritas. We found a nice looking restaurant at the Olivia Hotel in the middle of that district. We ordered bottled drinks and Marie's Diet Coke was a Coca-Cola Light in a bottle. We haven't seen Coke in a bottle for quite some time. The fish tacos were great but the tostadas had way too much lettuce on them. Even a rabbit couldn't have eaten it all. But all in all, it was good and we would eat there again. 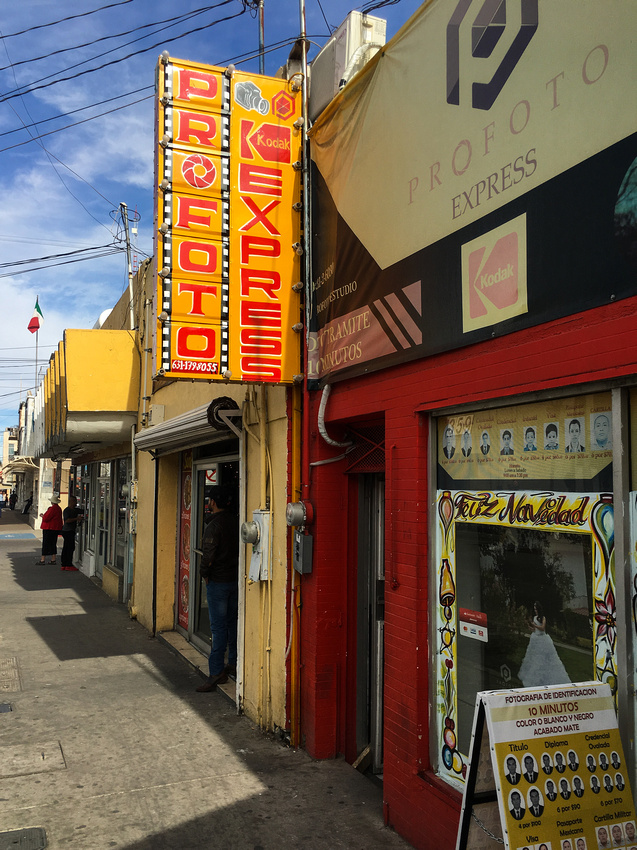 Being a semi-retired photographer and having owned a camera shop, I got a big kick out of the old Kodak signs still hanging around town. This first one was at a small wedding studio. They had some very nice framed portraits hanging on display. I think that camera on the sign looks like a Mamiya 645. 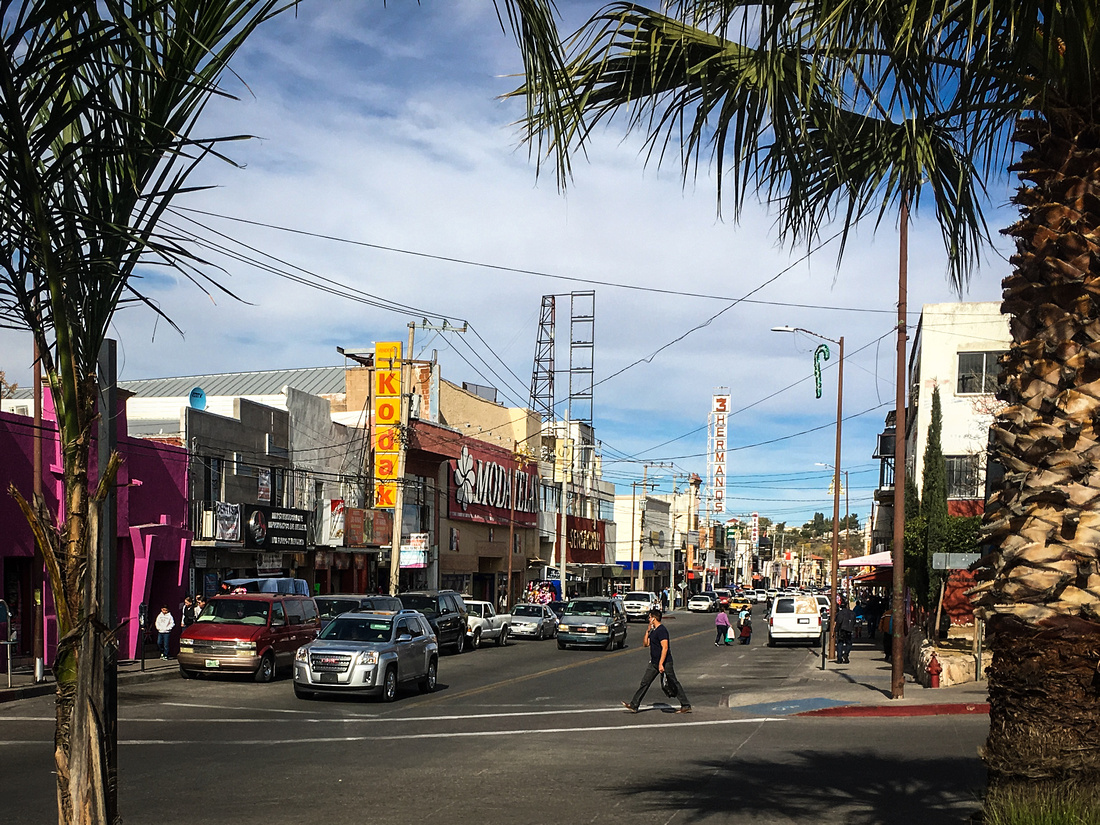 We were warned there may be lines when crossing back to the U.S. so we planned on getting there early. We finished our shopping and headed back. Our time in line was about a half an hour, from 3:30 to 4:00. Entry was easy, just showing your passport to the agent and if he asks, just tell him what you bought. At no time during our trip did we feel we were in any type of danger. Naturally though, being in a foreign country with such a reputation we were very cautious. 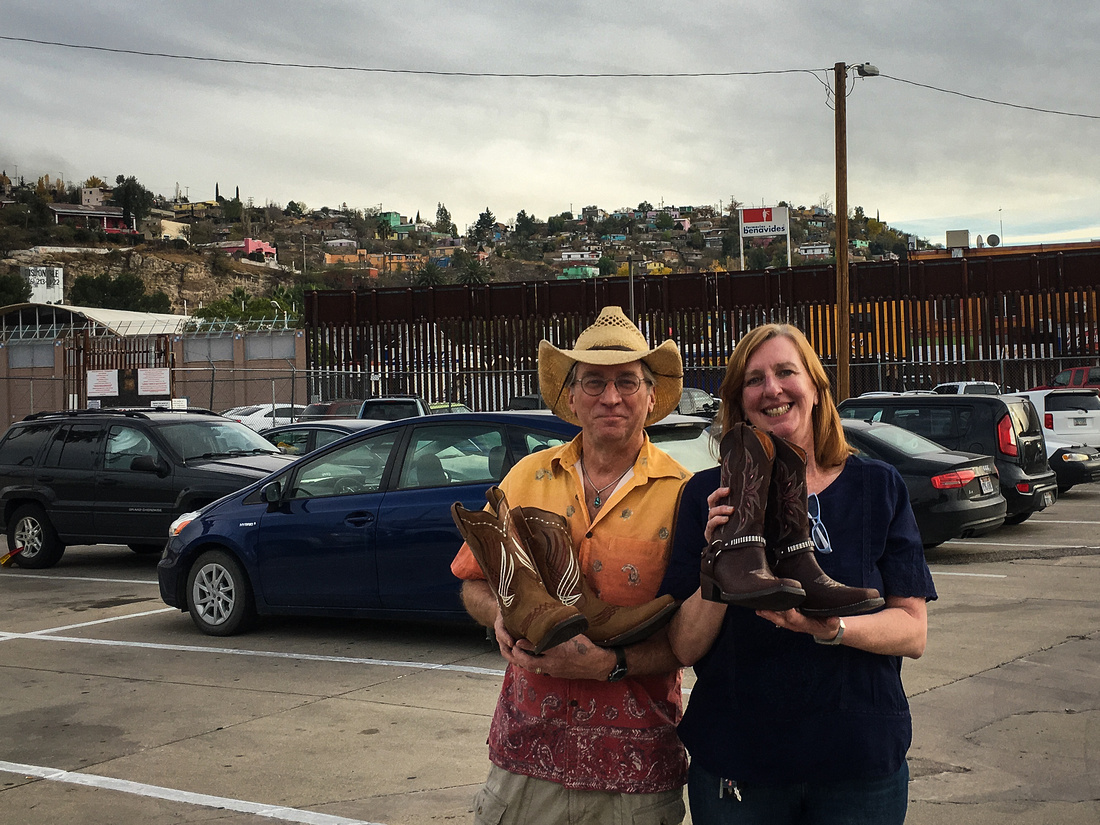 Booty(s) From MexicoTourists show off the Mexican boots they got in Nogales, Mexico.

Here's us back in the U.S. after "gettin' some booty(s) in Old Mexico". We both bought a pair of leather boots at a great price. There are a number of boot stores with good prices. We also got some tequila at a good price. But here in Tucson the grocery stores have sales on hard liquor. On sale, prices are about the same. We couldn't communicate with the liquor merchant because of language. Personally, I'll leave the dentists and pharmacies for someone else. We had a really great experience and now we can say we did it. With such a great price on boots and tacos, maybe we'll go back for more. And yes, that is "the wall" behind us.

Thanks for reading and we'll see you soon.

Janis(non-registered)
Kim and I are taking a bus trip to Nogales April 3rd . Nice photos and love the boots
Ed Lewko(non-registered)
Great read ! I'll bet you both look great in those cowboy boots !!!
Tom O’Neill(non-registered)
Enjoyed your narrative and photos. Having spent a lot of time in many oarts of Mexico and with family from one side there, I think Mexico gets a bad rap, altough recognizing that drug smugglers and terrible piverty takes its toll on both reputation and its peoples. While border towns can often reflect a country at its worst, your descrption and pictures were positive.image iof good peopkes and places on both sides. Enjoy your winter stay.
Jeanna(non-registered)
Good times in Mexico. Love the authentic foods. John, looks good in his cowboy hat and Marie, I love y'alls boots. Happy New Year.
No comments posted.
Loading...
Subscribe
RSS
Recent Posts
Eden Gardens State Park, Florida Monument Valley & Upper Antelope Canyon - Native American images from the Navajo Nation Elk Rut, Benezette, Pennsylvania Alaska 2021 Calendar Ducks On A Pond It's Good To Be Back! Photography is an art that has to be... Summer's cancelled so here's Valdez, Alaska Great Blue Herons Sign Post Forest, Watson Lake Yukon
Keywords
john levandoski photography travel nature wildlife national park alaska fine art art yellowstone
Archive
January February March April May June July August September October November December
© John Levandoski
User Agreement
Cancel
Continue